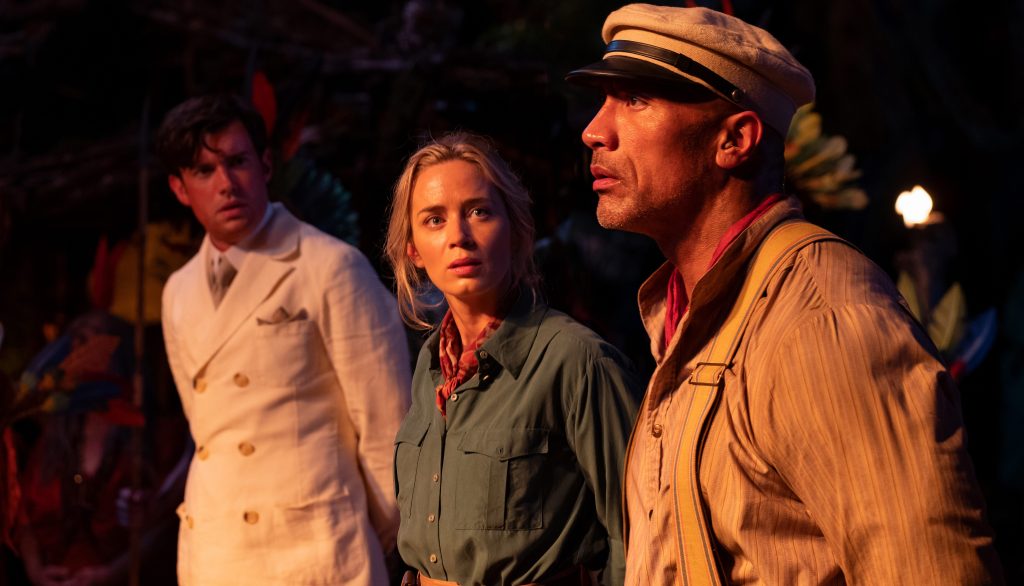 To date, Disney has tried to play an original animated film, a Marvel title, and an Emma Stone 101 Dalmatians villainess movie in theaters and on the PVOD tier of the studio’s streaming service simultaneously, and this weekend they’ll accelerate windows again on the Dwayne Johnson-Emily Blunt theme park-inspired title Jungle Cruise.

Given how we’ve seen Disney+ Premier siphon ticket sales with Black Widow in its initial Friday-to-Saturday decline and second weekend drop, industry estimates are conservative heading into the weekend for Jungle Cruise at around $25M domestic at 4,200+ theaters –the widest to date– and another $40M abroad for a $65M global start.

The Jaume Collet-Serra directed film opens in major international markets starting today with France and Italy, then adds Germany, Russia, Australia, Japan, Korea, Brazil, Mexico, Spain and the UK through Friday, as well as the Middle East and some other smaller hubs. This is essentially the same suite in which Black Widow debuted earlier this month — and the same rules apply with the film being available on Disney+ Premier in markets where the service operates ($29.99 in the U.S.). However, some things have changed as offshore markets deal with Covid-related shifts.

To wit, it’s a waiting game to see what happens in France this weekend. Turnstiles sputtered last session after the government introduced a new rule that requires cinemagoers to show proof of vaccination or a negative test. This did not sit well in the market which was more than 50% down from the previous frame and as F9 notably dropped 84% in its sophomore session. Also notably in France, Warner Bros/DC’s The Suicide Squad begins early offshore rollout this weekend there, as well as in the UK.

Meanwhile, the situation in Korea has worsened. Capacity is at 50% and there are no showings after 10PM. Japan is also still at a 50% limit and cinemas must close by 8PM.

In better news, Australia has said Victoria — which includes Melbourne and reps about 35% of the market — can reopen with capacity limits. New South Wales (including Sydney) is still shuttered. There has also been slight improvement in Brazil with 80% of cinemas operating (though at 40% capacity and with no shows after 9PM and with the market among the most reticent to bring families to theaters as the health crisis lingers).

Not in this opening suite, much as with Black Widow, is China or Southeast Asia. The former has yet to date Jungle Cruise (or Black Widow for that matter) and the latter, save Singapore, is shut.

Stateside, the projection for Jungle Cruise is below the opening weekend of Johnson’s Jumanji: Welcome to the Jungle ($36.1M) and Rampage ($35.7M), and right around the neighborhood of his 2009 Disney movie Race to Witch Mountain ($24.4M) and 2012 Journey 2: Mysterious Island ($27.3M). But these are all pre-pandemic numbers. Previews in the states for Jungle Cruise start at 6PM on Thursday. The pic will play at 390 Imax auditoriums, 825+ premium large format screens, 1,300 3D locations, and 230 specialty D-Box/4D screens. Reviews are at 67% fresh on Rotten Tomatoes, under the 76% certified fresh of Johnson’s Jumanji: Welcome to the Jungle and the 71% fresh Jumanji: The Next Level, but much higher than the 52% Rotten of the action star’s Rampage and well above the 48% Rotten of his Skyscraper.

Imax CEO Rich Gelfond hit it on the nose yesterday during the exhibitor’s 2Q earnings call, saying “What Disney did is experiment during the pandemic, which is what they said they were going to do.”

As long as there is a global pandemic, which in the space of six weeks can turn some markets for the worse, coupled with a lingering fear of the delta variant here in the states; Disney will brave the climate by trying to monetize flexible windows. Arguably not the best business model for a studio which had a tradition of getting their consumers throughout the years to purchase the same piece of content several times in its life cycle. While arguments remain about how much money is being left on the table, not just in the theatrical window, but the longer tail of PVOD for Black Widow, Cruella, Raya and the Last Dragon, Disney isn’t making such titles essentially free to its streaming subscribers like Warner Bros. with HBO Max. So, they’re making some cash at the end of the day for the film (keeping 85% of the PVOD dollars). Still, there’s the whole global piracy of it all, and Black Widow remains the most pirated film for the week ending July 26 on Torrentfreak. In fact, six of the top-10 most pirated movies came from streamers: In addition to Black Widow, there was Space Jam: A New Legacy, Jolt, The Tomorrow War, Gunpowder Milkshake and Cruella.

Focus Features has their Tom McCarthy-directed Matt Damon drama Stillwater hot from its Cannes Film Festival premiere which is at 71% fresh on Rotten Tomatoes. The pic is booked at an estimated 2,531 domestic theaters with previews starting at 7PM. Stillwater is estimated to do around $5M-$6M. The hope is that older audiences finally come out, in a sign that the arthouse demographic is heading back to cinemas.

Stillwater follows unemployed working class guy Bill Baker (Damon) who travels from Oklahoma to Marseille to visit his estranged daughter Allison (Abigail Breslin), who is jailed for a murder she claims she didn’t commit. Bill winds up taking matters into his own hands as he tries to navigate a country with a language he doesn’t know, alongside French actress-single mom Virginie (Camille Cottin).

A24 has the Dev Patel fantasy pic The Green Knight at around 2,700 theaters from filmmaker David Lowery, which is a re-telling of the medieval story of Sir Gawain and the Green Knight. Previews start at 7PM on Thursday. Green Knight has the best reviews out of the wide releases this weekend at 95% fresh on Rotten Tomatoes. The pic is expected to do around $4M in the U.S. and Canada. A24’s Zola is playing in theaters currently and available on PVOD after opening on June 30. Green Knight is on a 20-day theatrical window.