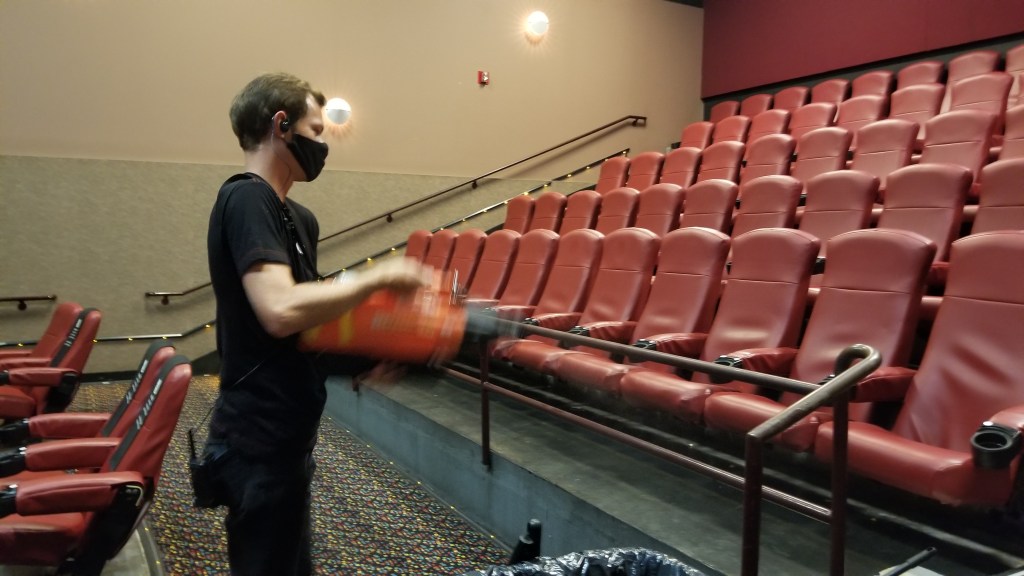 Wall Street analysts on a conference call were too polite to bring up the word bankruptcy directly, nor did Aron. He said again that the chain is fighting all day every day to find cash it needs to keep going beyond early 2021.

“In our industry, the gravity of our situation puts us all in almost a warlike position of resolve and determination,” Aron said, recalling the British PM’s “famous and defining speech” on June 4, 1940 that’s informally called, “We shall fight on the beaches.”

The number are stark and they’re clear, he said. As of Sept 30, AMC had $418 million in cash and said its cash burn for the quarter was about $108 million a month. That’s just under its global revenue for the third quarter of $119 million – versus $1.3 billion the year earlier. Losses widened to $900 million from $50 million. The numbers were basically irrelevant, the company said — what matters is the next three months.

“So, everybody, it all really comes down to one thing. We believe we will need to raise more capital to lengthen the runway into next summer. The simple question becomes, will we raise the needed capital or not?” Aron said. The hope and belief is that a vaccine will have been widely distributed by next summer.

When it’s safe and theaters everywhere are open, he noted that 44 films by his count were pushed out of 2020 are teed up and ready to go in 2021. He said the lack of high profile studio fare now is the main reason theaters are having trouble coming back for real even when they’re open.

The company has been good at finding cash. It raised $90 million in stock sales this fall and just filed this morning to sell another 20 million shares, which would bring about $40 million. Aron said AMC is talking with “more than a dozen strategic investors” about a equity investment in AMC. He didn’t give any details. He said is in discussions with lenders — or bondholders — “to gauge their interest in bolstering our liquidity.” Lenders helped out in a big way over the summer, raising hundreds of millions of dollars and lowering or deferring interest payments. AMC sold its Baltic theaters and may be planning additional overseas divestitures although Aron declined to comment on that.

The chain is also in talks with landlords for additional abatements like ones AMC asked for and received in March when theaters shut.

“It’s too early to know if these efforts will bear fruit or if so or when so by how much, but our days and nights are busy ones at AMC.”

AMC shares closed Monday down 9%, but were up 2.3% in late trading.